On February 15, ICLR released Hail climatology for Canada: An update. The report was written by David Etkin, Associate Professor of Disaster Management at York University.

The paper serves as an update to Etkin’s Canada’s Hail Climatology: 1977-1993, prepared for ICLR in April 2001. The update is based on an objective analysis of hail observation station data from 1977 to 2007.

Hail days data for the analysis was obtained from the Digital Archive of Canadian Climatological Data, Environment Canada from all hail observing stations in the country. For each station, monthly days-with-hail were calculated where the number of missing observations were less than four days in any month. This represents 96.7% of the records. Monthly hail days were adjusted for missing data by multiplying the unadjusted hail-day observation by the factor [1+ (number of missing days) ÷ (number of days in the month)]. 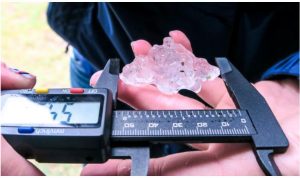 In the 1990s and early 2000s, ICLR conducted a number of studies focused on understanding the risk of hail damage in Canada. The hail research needs of insurance companies was acute before ICLR was established when Canada’s most costly hailstorm struck Calgary in 1991. In particular, ICLR published an earlier hail climatology (1977-1993) and conducted several workshops where hail was considered as part of a broader discussion of convective storm-related losses.

Institute members also contributed to an industry discussion that lead to the creation of the Alberta Severe Weather Management Society.

Fortunately, there were few large hail damage events in Canada between 1991 and 2008. Indeed, there was a period of almost ten years when the Institute received virtually no requests from member companies to study the peril. The industry directed ICLR to focus its research on other hazards, including the alarming increase in water damage. Indeed, hail research was not included in the Institute’s last five-year plan.

However, hail damage claims have ramped up in Canada in recent years. Just three wind/water/hail events in Alberta (2010, 2012 and 2014) totaled more than $1.66 billion in insured losses. As a result, in 2015 Canadian property and casualty insurers – through ICLR’s Insurance Advisory Committee – formally asked the Institute to investigate the peril and suggest actions insurers can take to mitigate future hail losses in the country.

Conducting an updated climatology of hail is key to understanding the current state-of-play for the hazard before more in-depth research is pursued.

Prior to joining York University, David Etkin worked for 28 years with the Meteorological Service of Canada in a variety of fields, including operations and research. He has been an associate member of the School of Graduate Studies at the University of Toronto since 1994, doing research on natural hazards, teaching and supervising graduate students. In 2003 he was awarded the Environment Canada Award of Excellence. Prof. Etkin has participated in three international hazard projects and was one of only two non-Americans to assist with the U.S. 2nd national assessment of natural hazards. He has been principal investigator for a NATO short term project on natural hazards and disasters and the Canadian Assessment of Natural Hazards Project that resulted in the book An Assessment of Natural Hazards and Disasters in Canada, which he edited. The summary report he wrote of this latter project has been widely distributed within Canada and was used by Public Safety Canada and Foreign Affairs Canada as the official Canadian contribution to the recent ISDR Kobe disaster conference. CT